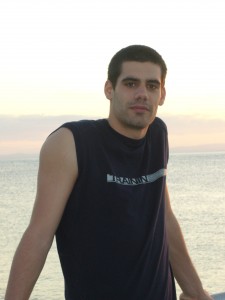 Frédéric is born on the 8th of August 1985 in Geneva. After having completed his compulsory education, he obtains his high school diploma in physics and applied mathematics. Attracted by mathematics, management and business, Fred chooses to enroll in the Faculty of Economic Sciences at the business school (HEC) of the University of Geneva.

An accomplished sportsman, he plays volleyball, his favorite sport, since the age of 7. With fourteen Swiss champion titles in various categories, he becomes a key player for Chênois Volleyball and the Swiss national framework.

Enthusiastic about new technologies and particularly computing, few are the keyboards and mice that can keep up with the hours dedicated to this passion. Self-taught and thanks to his knowledge, he generously becomes the “cyber-joker” of his entourage. Able to fix a computer, create a website or give advice on the latest products on the market, he is always the man of the hour.

Regarded as an exemplary young man thanks to his charisma and his “cool” character, he is a point of reference for his entourage, his little brother, his teammates and his friends. Calm-natured and composed, Fred leads his life in alignment with his numerous passions.

In order to maximize his chances for success in his studies and to satisfy his desire to travel, he takes off in April 2006 for a three-month language stay in the land of kangaroos. Even abroad, Frédéric continues his training sessions, preparing for the resumption of the volleyball season upon his return.

However, one morning, Fred wakes up with a tingling sensation and a lack of sensitivity in his right leg and arm. The symptoms, triggered by the weight training sessions, persist and push his to consult a doctor. On the 14th of July, the results of his scan reveal that he suffers from a brain tumor.

Upon his return in Geneva, he begins his fight against the disease: MRIs, scans, appointments of all kinds, operation, treatments. Little by little, Frédéric loses his mobility but is still able to live at home until, two months later, he has an epileptic seizure that marks the beginning of his hospitalization.

After eight long months fighting, like an angel, Fred took flight on the 4th of February 2007.